WHAV call letters were first broadcast on local radio stations in the spring of 1947, but the new station would not move into its new downtown studio until the fall of that year.

Now, 75 years later, today’s 97.9 WHAV also fits into the art deco structure. Today’s WHAV, like the original station, broadcasts from the Silver Hill transmitter and tower. His studios, now in the Ward Hill section of Haverhill, are moving back to the building at 30 How St. that still bears his name.

“WHAV is pleased and grateful to join WXRV – ‘The River’ – in the classic broadcast building that has long been associated with accurate, timely and reliable reporting and the delivery of essential local news,” said President Tim Coco. , whose career in the news began. at WHAV over 40 years ago. “Today’s WHAV is even more committed to original local news coverage as it is the last Haverhill-based news source serving the nearly 70,000 people in its license town.”

Coco also thanked Covanta Haverhill, particularly regional asset manager Mark Van Weelden and facilities manager William Zaneski, for underwriting a significant portion of WHAV’s moving expenses. He said the station’s annual fundraising effort in the fall is aimed at getting the rest of the money needed.

The two-story building on How Street was designed by local architect Clinton F. Goodwin, who once said he was inspired by classic broadcast buildings. Goodwin relied on older examples as most new construction was discontinued during World War II. Initial engineering of the station was entrusted to Frank H. McIntosh, who would develop the iconic McIntosh audio amplifier. The building was constructed by local contractor William H. Starbird.

WHAV’s main broadcast studio will be in a room virtually unchanged in time with original built-in cabinetry and acoustic wall treatment, while the Edwin V. Johnson Newsroom will relocate to the building’s former music library. Both will be equipped, however, with the most modern and advanced furniture and electronics for the highest quality stereo sound.

Although licensed under LPFM rules, today’s WHAV operates as a traditional, non-commercial educational broadcast station. He worked with the former owners of WHAV to continue the radio station’s legacy and maintain continuity.

When he was officially rededicated in 2017, descendants of WHAV founder John T. “Jack” Russ took part in the celebration and heard Russ’ voice for the very first time. This was part of a segment featuring Russ discussing the importance of local news.

“In the world of the press, we have followed the radio closely. We had to do this because we know that broadcasting is closely linked to the work that a newspaper must do—the dissemination of news and advertising and the public service to the community and its commercial life. Over time, the vital role radio plays in a progressive community will become more apparent,” Russ told the WHAV audience on March 16, 1947.

Seventy-five years ago, Massachusetts Lieutenant Governor Arthur W. Coolidge braved a blizzard to attend the grand opening of studios in downtown Haverhill. He offered his greetings on behalf of Governor Robert F. Bradford. Once WHAV completes its comeback, an official ceremony is scheduled. 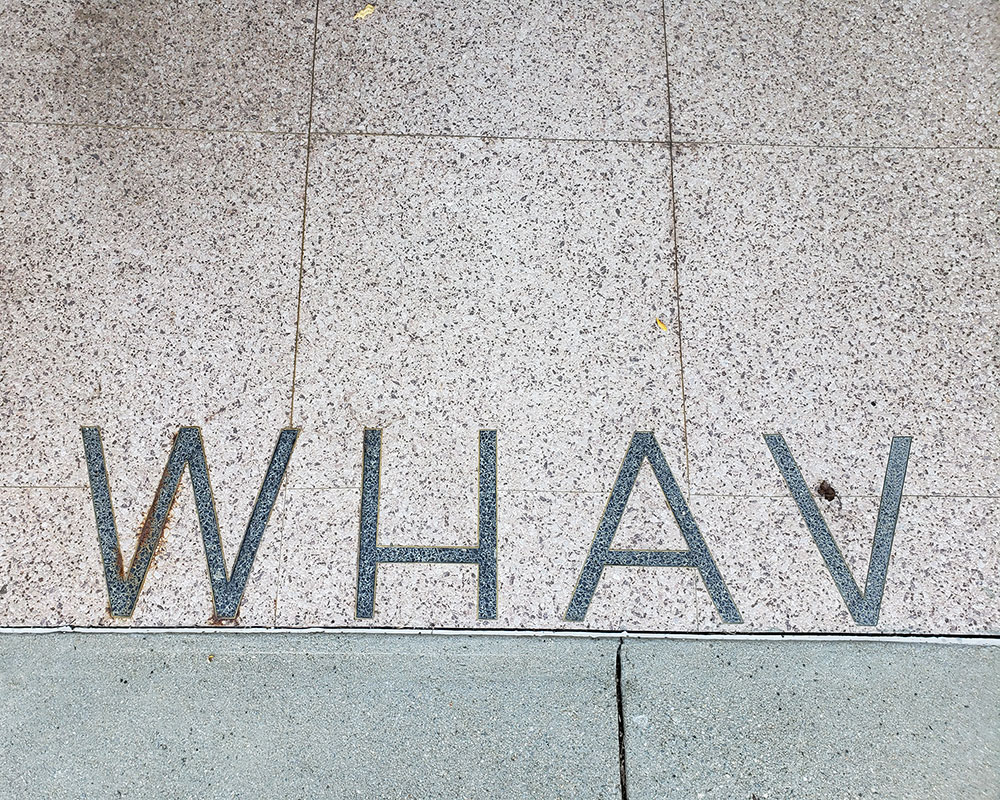 WHAV call letters are still part of the pavement outside the broadcast studios at 30 How St., Haverhill. (Photograph by WHAV News.)