Photo by Jeff Hogan An artist’s rendering of what the new building will look like.

LAP – On Thursday evening, the Lapeer Planning Commission approved plans for what will be the first completely new building constructed in downtown Lapeer in nearly 50 years.

Hingst said he was cautiously optimistic to usher in the landmark development in early 2023. He could engage a partner to help fund and develop the project.

“I’m a restaurateur, so maybe I need a little help with a project as big as this,” Hingst said, delighted to bring a new building that he hopes , will be a catalyst to encourage other developers to design modern buildings that “still respect the history of downtown Lapeer. 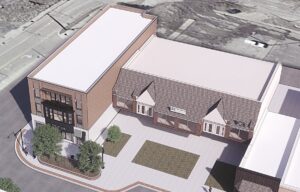 A rendering of the development shows the new three-story building on the northeast corner of West Nepessing and Mason Streets adjacent to Chef G’s to the east.

He added: “We have been keeping an eye on properties and opportunities in the city centre. We’re big in downtown Lapeer… We wanted to make sure this is a good fit for downtown, and we’re really happy with the way the building looks.

Plans for the building include general retail space on the ground floor facing West Nepessing, while the remainder of the first floor is proposed as a prep kitchen to be used for Woodchips restaurant operations. The second floor on the site plan showed flexible office space that could include a woodchip head office and other professional (including medical) offices, while the third floor will include four apartments. Small balconies are offered for the residential units, one facing West Nepessing and three on the Mason Street side of the building.

Plans drawn by Auburn Hillsbased Designhaus Architecture LLC indicate that each floor will comprise approximately 4,400 square feet for a total of 13,188 square feet for the entire building. Parking will be in a city-owned parking lot, north of the building. 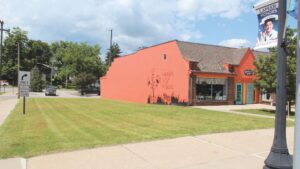 The new three-story building at the northeast corner of West Nepessing and Mason streets is expected to start in 2023. Acquiring and developing the land is expected to cost about $2 million, said Patrick Hingst.

Approval of the project by the Planning Commission was contingent upon approval of easements by City staff and the Lapeer City Commission to permit the structure to allow the third floor balconies to extend approximately two feet above above the city right-of-way (sidewalk), as well as to address other issues identified by city department heads.

The motion approving the site plan stated that it “will not interfere with the light, air or privacy” of any other structure currently in use. Since the new building is proposed to occupy all of the vacant land, from the north driveway (parking lot) to the sidewalk facing West Nepessing Street, it will create a courtyard effect in front of Chief G’s whose building is set back from the sidewalk.

Commissioner Marty Johnson said, “This is an opportunity for her (owner Ginni Bruman) to do something different with this space. I think it can be really nice.

Commissioner Catherine Bostick, although she had no problem with the appearance and plans of the new building, wondered if the new building might interfere with the visibility of passers-by on West Nepessing, especially if they are driving from the west en is in downtown Lapeer, to see the Chief G’s Building. It was noted that a monument sign in front of Chief G’s would be permitted.

Upon approval of a site plan, in Lapeer, construction of a project must begin within one year or the site plan application must be resubmitted.

• The Planning Commission has granted a site plan extension to Township of Elba residents Charles and Donna Farley for a 5,000 square foot multi-tenant office/commercial building they plan to build on the north side of DeMille Boulevard, northeast of the Stonegate Health Campus. They have until April 8, 2023 to launch the project.

• The Planning Commission also granted a site plan extension until July 8, 2023, when builders of a new 5,113-square-foot Security Credit Union branch at 1073 S. Main, M- 24) must begin construction on the approved project first. in April 2017.

The credit union branch should be located on the east side of the freeway, just north of a RE/MAX real estate office and five lots south of Tower Drive. The original draft plans call for a driveway that will connect to Cliff Drive to the east. The new building will include a drive-thru.

Upon completion, Security Credit Union management has previously said it plans to close the office at the northwest corner of N. Lapeer Road (M-24) and Davis Lake Road in Mayfield Township.