According to data presented recently by Afrucat, the Association of Fruit Companies of Catalonia, and the DACC, the Department of Climate Action, Food and Rural Agenda, the Catalan production potential of peaches and nectarines will be reduced by approximately 70% and will amount to 166,910 tonnes. . This will be the second consecutive year in which weather incidents have seriously affected Catalan production.

The early April frosts ruined a large part of the production. It was the most severe freeze in 40 years. Also in April (20 and 23), 2 hailstorms damaged some productive areas. The first did not cause significant damage, but the second affected about 500 hectares.

Harvest forecast for cherries, plums and apricots
Forecasts indicate that the cherry and plum harvest will also drop drastically, with a 36% reduction in the cherry harvest, to 5,287 tons, and a 47% drop in the plum harvest, to 2,622 tons. .

In addition, the harvest should be delayed by 5 to 12 days throughout the territory.

As for apricots, last April forecasts had already been made public announcing a 67% loss in Catalan production and an 85% drop in Aragonese production, with harvest volumes estimated at 2,970 tons and 2,988 tons respectively. tons. 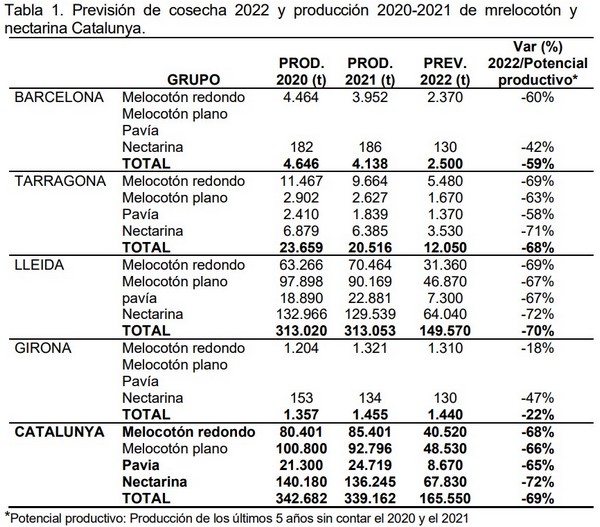