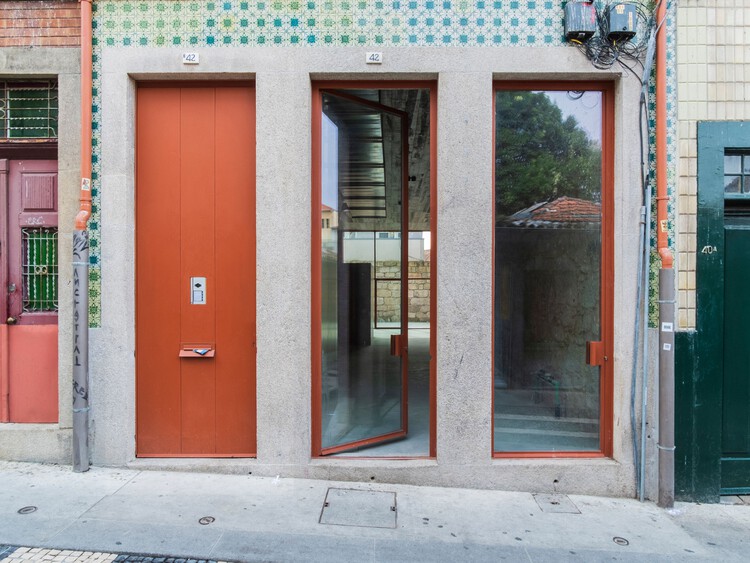 Text description provided by the architects. Reconstructing and expanding a 19th century building, in the center of the city of Porto, which was in a state of ruin, managing to save the main facade, still in a reasonable state of conservation, was the purpose of this project. We tried to reintroduce a residency program, which could nevertheless be more attractive for a younger population, namely national or foreign students, young couples or tourists.

Restoring a building represents, after all, a new project, allowing the development of a methodological process defined by the restoration of a facade, whose language is dominant in the city and whose system has demonstrated a great capacity to adapt to various programs functional which, nowadays, are established in the city. The ruined posterior facade allowed the introduction of another language, adopting the use of painted metal panels, giving continuity to a mixed structure of steel and concrete, which solved the structural problems of the body to be restored more economically.

The adaptation of this building has integrated, in addition to the residential program on the upper floors, a space for a small restaurant or café, on the ground floor, delimited by an open space connecting the two facades of the building, favoring an image of more great visual permeability between the street and the backyard. In this way, direct sunlight becomes visible at street level.

The link between the existing construction and a new autonomous constructive system developed from the interior of the building towards its exterior, formatting the spaces and articulating the whole in its form and functioning, like an interior cuirass, an urban “pacemaker”, articulating memory with the new transformative reality, naturally expressing its language and functional morphology. The program of four apartments, defined by small studios characterized by the location and the fusion in a single volume, the kitchen, the bathrooms and the closets, built with lighter materials, such as MFD, natural wood and l stainless steel, distributed in both sides of the building, forming, on the top floor, small dormant balconies, using the space resulting from the classic shape of the attic with the difference that, now, the roof is in concrete.